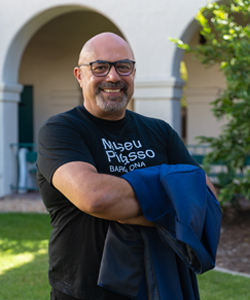 Arts Alive SDSU has announced actor, playwright, director, visual artist, and producer  Herbert Siguenza as its Artist in Residence for the 2022-2023 academic year.

Herbert Siguenza is a founding member of the performance group Culture Clash, along with Richard Montoya and Ric Salinas. Culture Clash is the most produced Latino theater troupe in the United States. ​He​ is also a visual artist and has exhibited both nationally and internationally. He has a BFA in printmaking from the California College of Arts, Oakland, California.

His film and television credits include performance on the Cartoon Network, the film Larry Crowne, and Pixar’s 2017 Oscar-winning animation feature, Coco.​ ​Siguenza recently concluded a Residency at the San Diego Rep as their Playwright in Residence and wrote and performed critically acclaimed plays like A Weekend with Pablo Picasso, Manifest Destinitis, and the Narco comedy Bad Hombres/Good Wives.

Now in its third year, the Artist in Residence program has an established history of inviting the entire campus community to participate in the creative process.​

​“I am a professional working artist that has been in the field creating content for over 35 years,” said Siguenza. “I want to bring that attitude of real-world experience to my project. I don't sit around and talk about art, I like to get up and do it.”

Siguenza will meet with classes, student organizations, and on-campus resource centers to engage in critical dialogue about arts activism, identity, and diversity, especially as they relate to Latino/a/x cultures.

The residency is sponsored by the Division of Student Affairs and Campus Diversity, contributing to the goals of the University’s strategic plan and reinforcing SDSU’s commitment to diversity, equity, and inclusion.

In spring 2023, Siguenza will be producing what he currently envisions as an original variety television show that will incorporate social satire, fictional news, and original music. The content of this program will be the result of the themes that have emerged from his conversations throughout his residency.​

​Siguenza described one of his goals for the residency as being “outside of the box”  interactions between artists and audiences.​ ​“I want to learn what makes this college generation tick,” said Siguenza. “What are the issues? What motivates and inspires them?”

Siguenza’s first public remarks as the Arts Alive SDSU Artist in Residence will be his Artist Talk where he will discuss his years of work in theatre, film, and television, focusing on how his unique perspective shaped his professional journey. He will discuss how the pandemic forced him to think creatively and use the resources he had available. ​It will also include an audience Q&A session and a video presentation highlighting his impactful visual art.  ​

Siguenza plans the Artist Talk to be one of the first of many conversations in which he can address the SDSU community about critical social issues, and learn what they would like to see discussed on campus.​ ​These conversations will directly inform the development of the satirical television show to be created with SDSU students across the University.

Herbert Siguenza’s Artist Talk will take place at 3 p.m. on Wednesday, September 28, in the Gold Auditorium at the Donald P. Shiley Bioscience Center.

To contact Herbert Siguenza or request a presentation, please email him directly at [email protected]​ ​Learn more about Arts Alive SDSU and the Artist in Residence program at ArtsAlive.SDSU.edu.